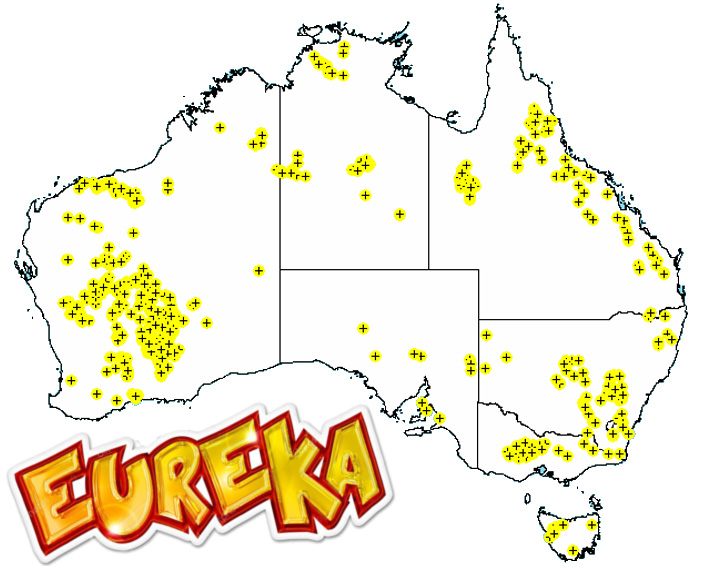 “a reality TV show that has quite literally damaged the hobby and business of prospecting and mining for gold due to it’s fantasy content.”

Gold prospecting is a “hobby” or “interest”, not a sport or get rich quick scheme. If you are doing it for the money, you are definitely there for all the wrong reasons. If you are considering up scaling to gold mining, it does not always equal profitable returns and is extremely costly for licensing etc…

Aussie Gold hunters provides good entertainment for those into “scripted fiction”… Yes, they do find gold – but it is often planted from a previous find at either another time or location. I personally spent much time investigating and identifying the so-call gold find locations. Most of which were “great for TV”.

Stories are emerging of AGH dramatizing any issue that will make for good watching. Remember, the media are professionals of manipulation encouraging us to become addicted to watching their shows and buying products or changing our beliefs.

Prospecting equipment is not cheap with professional detectors costing $5,000 to $10,000 – some areas require 4WD vehicles year – round. Sluicing requires skill and good knowledge of gold deposits with equipment ranging from a simple pan to a full trailer set up costing thousands.

Diggings are an excellent spot to start, as with every prospector that has come before you! We still find very small gold on occasion on diggings – on a rapidly decreasing scale. You can buy gold prospecting maps online or from your favorite prospecting shop – try Google in your area.

Each state has different regulations and licensing requirements, the onus is on you. Here is what you can expect from some of Australia’s more rewarding states that have access for the avid gold prospector.

Limited forest means a slowly depleting fixed area with strict boundaries. As they say, all the easy gold has long gone now and we are also seeing people come into the bush raking, digging and illegally working the land leaving quite literally a mess for those who follow. Ad to that an increase in “fence jumpers” and the sentiment from local land owners towards prospector is rapidly decreasing.

The first thing you notice is that our bush land is becoming the local rubbish dumping ground. This may or may not have something to do with the exorbitant tip rates we are seeing from local councils. I took my 4X4 and tandem trailer to my local tip….$260!

Next we see massive areas, sometimes multiple football field sizes, totally raked clean destroying the forest floor micro systems and making the ground look barren. They are left that way with unfilled holes everywhere – whether they are digging trash of gold, didn’t matter to them – just they end result of greed.

There has been even more forest of late “locked up” to protect what little we have – though not in the best interest of those who do the correct thing. Shows such as AGH have glorified the hobby leading many to believe they to might find the next “Welcome Stranger”. This show could not be further away from the truth and many wish it never existed. The harmful affect it has had is insurmountable.

Most people will never see a gold nugget of 1 ounce or more while prospecting in their entire life. AGH is definitely based on “glorified fact” than actual realism. Gold fields have been “raped and pillaged” in the en devour of man’s most prominent downfall – GREED. Skyrocketing gold prices has seen many consider gold prospecting as a “get rich quick scheme” they can have a hand in.

When you hear of finding “nuggets”, the reality is that particularly in Victoria, you can go days, weeks or even months without landing gold while swinging a detector. Typical nugget sizes are half a gram or less – so if you manage to snag just one nugget, you “might” cover your fuel costs!

Victoria’s Golden Triangle region is word-famous for the large sizes, purity, and quantities of gold nuggets found within the area. It continues to yield significant finds even at the present times, and it is perhaps, one of the better known Victorian gold-bearing areas frequented by prospectors with modern gold metal detectors.

The region, encompassing an area of 9,400 sq km, nestles on the northernmost portion of the Greater Central Goldfields region. The base line of the triangle begins at the township of Avoca marking the South West point, and then treads a line to Castlemaine City, which marks the South East point, and with both sides of the triangle meeting at the apex in Wedderburn Town to the north.

The Welcome Stranger Nugget is the largest solid gold nugget found in on Earth. It was dug up near the town of Dunolly in Victoria, Australia back in 1869.

Now this isn’t to totally discourage the keen gold prospector – regulars and professionals have been known to collect around $100-$200 daily at a “reasonable consistency” – so comparable to an average weekly wage – no, not a top of the town income.

There have also been one-off finds of nugget around $30k, but rarely come along – and considering there are more than 20,000 licensed prospectors in Victoria – the odd’s are not great. Maybe if you had land to dig, the digging equipment and the license to do so, you could see figures of $1,000,000 plus….with up front expenses of close to half of that and only limited ground to mine.

Alluvial (panning/sluicing) gold can be consistently be found in creeks across Victoria (note the many restrictions though) with almost guaranteed finds, though typically around a gram a day. The effort to return equation does not quite work in your favor unless you hit a pocket, but they don’t last. Add to that the need for flowing water which is hugely random, and suddenly it seems less appealing other than from a hobbyist point of view.

Increasing numbers of theft and break-ins, and even assaults in and around the gold fields would suggest the necessity to think about your safety and the safety of your car and expensive equipment prior to venturing out to prospect. I have personally experience many of these situations while out “enjoying” the native flora and fauna.

I have also been bitten numerous times by various bull ants – extremely painful and lasts up to two weeks. I’ve been bitten by a spider multiple times, again – a terrible experience. Add to that flies, bugs, cockroaches and mosquitos of varying sizes and your day in the bush can be quite interesting. Yes, I’ve even been bitten while wearing “FIVE” different heavy duty tropical strength insect repellents!

While there are various different areas, Queensland carries the heat of WA, plus humidity and bush, in particular, a lot of grass on the ground making swinging a coil troublesome.
Basically, for the more prosperous areas in North Queensland, think of the first scenes of Indiana Jones and the temple of doom.

Bugs, spiders, snakes, tick, thick bush, heat and humidity. The reward? There is lots of good sized gold nuggets in some areas with one particular prospector being rewarded with around $300,000 for a week of swinging his GPZ 7000 detector. NOTE: NOT a typical scenario!

Many of these areas are on private property, lease holds or stations (country ranches spanning thousands of square kilometers). Access to some areas are seasonal due to heat and weather, and can cost you hundreds or even thousands to camp there with your own equipment (caravan etc…)

Good gold can still be found in the more remote areas – if you fancy yourself fit and a bit of an adventurer. Gaiters are mandatory and mosquito born disease are common considerations for these areas.

Lease jumpers, rubbish dumpers and (armed) station owners who have just had enough. WA is a massive area as dangerous as they come – primarily due to the heat and isolation, with much of the land covered by corporate and individual mining leases.

You are best served to get an education in these processes before venturing out or face some health prison time (should you get caught) or a $6,000 + fine! Applying for prospecting permits differs hugely as well as applying to access gold claim sites.

I must stress thee importance of safety and survival equipment, communications and emergency beacons plus a good amount of water for WA above all else. Mine shafts, venomous snakes, scorpions and heat are just some of your enemies while hunting for the shiny stuff!

Take spare everything! You will find yourself thousands of miles away when your harness fails or you wear through a skid plate and any other form of supplies including food. Cell/mobile phone coverage is by satellite only – same with internet – fuel is scarce so carry plenty spare.

I had a friend spend a week prospecting in WA only to return with 12 grams which puts him well below costs of traveling there and back via road. Results vary hugely in WA so don’t head over expecting to return with your retirement fund. Read all the FaceBook groups, join all the prospecting forums – get an education of the “reality” of “reality TV” before you get disappointed.

Be the first to comment on "Aussie Gold Hunters"